I’m back with another Book Tour post today.  This time, it’s for something a little more out of my comfort zone.  Although, this one does have a giveaway.  Read on to find out more about it.

Death Before Dishonor is written by Kenny Hyman.  Before I go any further though, I will say, that I gave it a go but didn’t love it.  It has nothing to do with the writing nor the story.  It was simply that it isn’t my cup of tea.  I never give up on a book, because they all deserve to be read.  This one does too.

Terry and Yuri are brothers.

They are different, Terry is adopted by Italian-American parents who later go on to have Yuri.  The boys are loved deeply but when Terry becomes the subject of bullies, they are lead into a world that could be the undoing of them.

“Guided by Ninpo–the fanatically religious code of the Shinobi–Terry and Yuri trade their swords for rifles and market themselves as killers-for-hire for any employer with a contract that aligns with their values.

And, life is good.

Until, after nearly a decade, they are recalled to Japan to fulfill Ninpo’s most sacred duty–a duty that could cost them their lives. As their past catches up to their present, the brothers are led to an unbelievable and inconceivable truth: all is not what it seems in an organization that demands secrecy from its followers, as it may also have secrets of its own–secrets that inevitably could lead to the deaths of countless innocents and threaten to extinguish an integral part of Japanese history that the two American-made brothers have come to identify with.

Threatened from all directions by enemies as shadowy as themselves, Terry and Yuri realize that vengeance and honor are their only allies as they race time to avenge their dead. Will they succeed or will they find themselves the prey of their enemies?

Brotherhood will be tested – so will honor.”

Death Before Dishonor isn’t a story for the faint hearted.  Some scenes were enough to make me shut my eyes and squirm in my seat.  However, I have watched far worse.

As with all my book reviews you can buy Death Before Dishonor by clicking the affiliate link below. 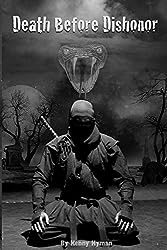 Kenny Hyman is a native of the DC Metropolitan area of Maryland, and went into the military after high school.  He grew his love for writing, both technically and creatively, as he travelled the world and pursued higher education.

He is an avid swimmer with a love of boxing and Kung-Fu, and a huge fan of science fiction, fantasy, action-espionage, and suspense.

Authors such as Brent Weeks, Karen Traviss, James Lovegrove, and Matthew Stover provide his writing inspiration because he “love(s) their styles and the way they craft their metaphors”.

A diehard fan of DC Comic’s Batman and Harmony Gold’s Robotech, nothing makes him happier than watching Gotham criminals run in terror from winged apparitions and watching 50-foot aliens get the crap stomped out of them by transformable spacecraft.

Do you fancy giving Death Before Dishonor a read?

Then why not enter the giveaway using the Gleam widget below to win an eBook of Death Before Dishonor by Kenny Hyman.  Please read the terms and conditions carefully before entering.

5 Ways To Get Involved In School Life

Inspiring a love of learning

I suck at meditation