It blog tour time again and it’s another Faith Martin DI Hillary Greene book.  This is book 11 (out of 17) and Hill is feeling her age and due to retire shortly.  She’s been avoiding big cases and winding down her workload in preparation… until Marcus Donleavy decides to throw her in the fire.

Naturally, I don’t mean a literal fire… he practically forces her (with help) to take the next suspicious death that shows itself.  It’s this case that throws an old adversary Hillary thought she’d gotten rid of back into her path.

The latest in the DI Hillary Greene series, Murder at Work, is another great detective novel from Faith.  Her plot lines are somewhat predictable but written superbly.  I really do find myself almost watching Hillary and her team at work.

Faith includes enough detail to tempt the imagination without telling her reader what to think.

Despite me saying her plot lines are predictable, I still can’t stop turning the pages on my Kindle and love to try and figure out who the murderer is as I’m going along… I’m usually wrong however.

I would highly recommend giving Faith’s DI Hillary Greene series a whirl if you haven’t already.  You can buy Murder at Work by clicking the image below. 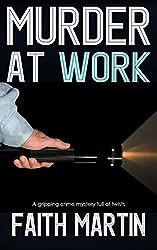 As always, I’ll provide you with the entire series.  The images below are clickable images and each one will take you directly to the book of your choice.

Faith Martin has been writing for over 25 years, in four genres and under four different pen names. She was born in Oxford and sets most of her crime novels within sight of the city of dreaming spires. A real nature lover and afficionado of the countryside, descriptions of wildlife and native flora often find their way into her manuscripts. Right now, JOFFE BOOKS are re-issuing the DI Hillary Greene novels in new updated editions! The first 11 books in the series are available now. Her romance novels, written under the name of Maxine Barry, are now available from Corazon Books. IMPOSTERS In PARADISE, and HEART OF FIRE are both out, and others will very quickly become available in the future.
Her first foray into writing ‘spooky’ crime, (and written under the pen name of Jessie Daniels) comes out in November 2017. THE LAVENDER LADY CASEFILE is published by Robert Hale, an imprint of Crowood Press.
As Joyce Cato, she writes more classically-inspired ‘proper’ whodunits. So, if you like an amateur sleuth, plenty of clues and red herrings, plus a baffling murder mystery to solve, these are the books for you.

5 more appointments to expect with 22q