March is turning into a busy month for book reviews.  This is the first of four before the end of the month.  So, my fellow bookworms, are you ready for the latest case of Detective Tom Mariner and his team?  This is a tricky one, involving the kidnap of a 6-week-old baby which leads to an avalanche of criminal activity. There’s definitely more to the case than first meets the eye.

Baby Lies is the fourth in the DI Mariner series written by Chris Collett.

It is a revised edition of an earlier release titled Blood Money.  Straight up,  Baby Lies is the first book I have ever read from Chris.  I went in blind, with no prior knowledge of Detective Mariner and his team and I was concerned that this would affect how much I enjoyed the book.

It turned out that I was hooked from the end of the first chapter.  I started it on 2nd March and 36 hours later, I marked the book as completed. It was a thrilling read that kept me wanting to turn the pages.  (Figuratively speaking given that I’m reading on the Kindle.) Chris’ style of writing made my job of reading it very easy indeed, although I was quite miffed with myself for not seeing the climax coming until just before.  (A lot of similar novels are easy to guess.)

Tom Mariner is a great protagonist.  He’s a likeable detective and has a heart of gold.  He’s compassionate, kind and caring, but also married to his job.  This causes issues in his personal life and prevents him from really settling down.  He really didn’t deserve what he got though. That part of the book made me sad.

Chris Collett’s Baby Lies gets a 5/5 from me today.  It was a gripping story, full of twists and turns that kept me guessing until the very end.

If you are interested in reading Baby Lies, you can purchase it by clicking on the image below. 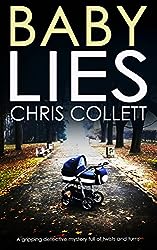 However, if like me, you prefer to start at the beginning (which is what I’m going to do now!) then you can purchase the first three books by clicking on the images below. 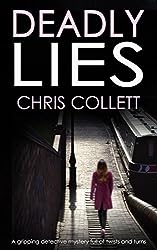 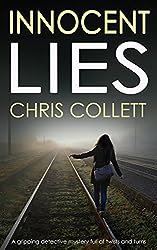 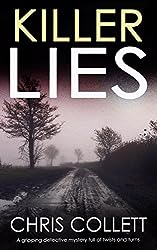 I was born and grew up in a Norfolk seaside town, almost as far east as it’s possible to go in England without falling into the North Sea. There I worked variously in a boarding house (now defunct) a local bakery (closed down) and a crisp factory (razed to the ground). I graduated in Liverpool, then for twenty-five years taught children and young people with learning disabilities, including autism, before going into higher education as a senior lecturer.

Mindful of its reputation, I moved somewhat reluctantly to Birmingham, where I met my husband, in 1981. But just a few years later DI Tom Mariner was created to police its mean streets, and these days I relish the vibrancy and rich social history of the city. After eight outings for Mariner, I still feel as if I’ve barely scratched the surface.

Recently retired from lecturing and I’m currently luxuriating in the time I now have to continue the Mariner series, alongside published short stories and academic works. In my spare time, among other things, I’m a manuscript assessor for the Crime Writers Association.

Thank you very much to Chris and Joffe Books for the copy I read in order to write this review.

Creating a Sensory Garden that will excite ALL the senses