These blog tours are coming around too quickly for me to keep up.  Today it’s my stop on the blog tour for Murder by Fire, the tenth instalment in Faith Martin’s amazing DI Hillary Greene series.

I interviewed Faith a few weeks ago and it was great to find out more about her and her writing methods.  The development of the characters in the DI Greene series is fantastic and I love following their stories.

In Murder by Fire, DI Greene investigates the murder of publisher and devout Christian, David Merchant, after his body is found in a bonfire in his back garden.  As the team fight to solve the case, personal lives continue to cause problems that spill, unwanted, into their professionalism.

Before I even start my review, I need to say I’m not quite at the end of Murder by Fire.  I still don’t know who killed David Merchant or why.  But having read so many of Faith’s books I know it’s going to be an explosive finale.

DI Greene continues to be a force to be reckoned with and certainly deserves the respect given to her.  The younger members of her team look up to her, even if it is begrudgingly from a certain someone.  The removal of the thorn in her side at the end of the last book has meant that the team dynamics have changed.

Murder by Fire is another brilliant read from Faith and I’m very much looking forward to the eleventh book… I wonder what it will be called?

You can read Murder by Fire by clicking on the image below. 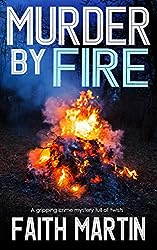 If you want to start at the beginning here is the entire series… just click on the image to buy them.

Faith Martin has been writing for over 25 years, in four genres and under four different pen names. She was born in Oxford and sets most of her crime novels within sight of the city of dreaming spires. A real nature lover and afficionado of the countryside, descriptions of wildlife and native flora often find their way into her manuscripts. Right now, JOFFE BOOKS are re-issuing the DI Hillary Greene novels in new updated editions! The first 10 books in the series are available now.

Her romance novels, written under the name of Maxine Barry, are now available from Corazon Books. IMPOSTERS In PARADISE, and HEART OF FIRE are both out, and others will very quickly become available in the future.

Her first foray into writing ‘spooky’ crime, (and written under the pen name of Jessie Daniels) comes out in November 2017. THE LAVENDER LADY CASEFILE is published by Robert Hale, an imprint of Crowood Press.

As Joyce Cato, she writes more classically-inspired ‘proper’ whodunits. So if you like an amateur sleuth, plenty of clues and red herrings, plus a baffling murder mystery to solve, these are the books for you.

Inspiring a love of learning

I suck at meditation